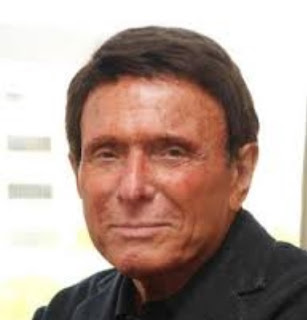 Best known for producing Hollywood Squares along with his longtime business partner Bob Quigley, Heatter's career in the genre spanned over fifty years. He created his first game show, Video Village, in 1960. He and Quigley broke through with the signature hit, Hollywood Squares, in 1965. In one form or another the show has weathered the TV storms ever since, with recent version Hip Hop Squares now running on VH1.

Merrill Heatter's next most successful show was probably the 1970s' Gambit, which much later spawned Catch 21 on GSN. (It reruns on the network to this day.) He had a long list of credits to his name, and there's even a wiki dedicated to Heatter and Quigley's shows. Check the sidebar if you don't believe me. R.I.P.
Posted by Casey Abell at 10:20 AM

About Me, If You Want To Know 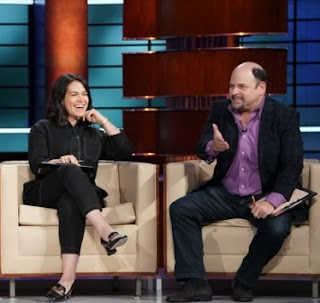 Jason Alexander joins the panel on To Tell the Truth and a show biz site posts lots of photos. Jason's got a goatee nowadays, by the way.
Jun 6

James Corden and Landon Donovan turn up on Game On. There's a half-time dance with the Laker Girls and "a leap of faith across sky-high platforms," too.
Jun 6

Alec Baldwin signs on for a western action film called Rust. He also shows up on Match Game in a prisoner's outfit. No comment on his legal issues.
Jun 5

A grumpy critic decries "lemons" like Millionaire and Press Your Luck. Not a game show fan, I guess. But he likes talent contests, so there.
Jun 4

Pundit Marc Berman reviews game show history. The first U.S. TV game show was Spelling Bee in 1938. Contrary to popular belief, I was not a contestant on it.
Jun 4 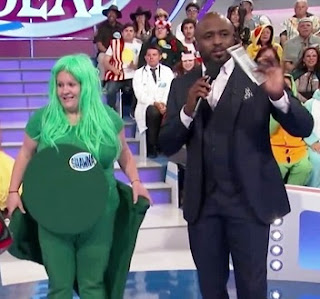 Shawna Applegate faces the decisions and zonks on Let's Make a Deal. "I ran the wrong way, with my wig falling off." Don't worry about the wig.
Jun 3

Stony Brook University academics feature on Disney+'s Big Fib. "It was nice to be recognized by Disney as an expert." Expertise helps.
Jun 3

In case you're wondering, some sets of Jeopardy eps leave Netflix on June 27. You can still watch the show every weekday on regular old TV.
Jun 2

A celeb site wants former Deal or No Deal model and now sort-of princess Meghan Markle to compete on Dancing With the Stars. Can't wait.
Jun 2 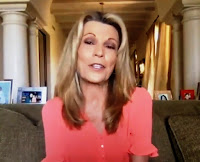 Wheel of Fortune's Vanna White likes to knit. That's why she's got a yarn company and is appearing on a "virtual crafting group." Knit on.
Jun 1

Wheelchair-bound Gina Schuh cops thirteen grand on The Price is Right. She's an Elon Musk fan. She also bemoans the taxes she had to pay on the loot.
Jun 1

Video from our little genre


Pat Sajak gets up close and personal with the merch in a throwback clip from Wheel of Fortune. Pat is such a card.
Jun 6


Time for human bowling on Game On. Headfirst into the pins.
Jun 5


A sort-of highlight reel of Anderson Cooper and Andy Cohen on Millionaire. They're not trivia mavens.
Jun 4


They talk about various kinds of hair on Family Feud. Steve sings about the subject.
Jun 3


Jeopardy tries pictures of movie titles. The contestants get the idea.
Jun 2

Scrounge through this blog

This blog's reason for existence

From the most brilliant, insightful and all-round swell Game Show Forum thread ever created:

You're going to find that doesn't work well here, which is one of the reasons Mr. Abell took his business elsewhere.